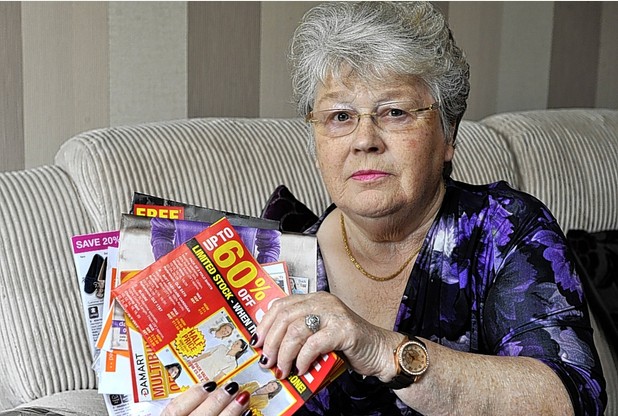 Jean Oates, age 78, was scammed out of thousands of pounds, consisting of her life savings. She is now telling others that they should be careful not to become victims like her.

Oates began purchasing a number of items from credit catalogues posted through her door after the death of her husband, Leonard, in October of last year.

The elderly victim of this vicious scam gave her credit card details to the companies so she could pay for the items she wanted as well as part of various competitions. She later discovered that she was paying for items she did not order at all.

This continued happening for a number of months, and while Mrs. Oates is not aware of the exact amount of money that she was scammed out of, she says it is easily in the thousands of pounds.

Mrs. Oates stated that she feels embarrassed and ridiculous over what has happened to her. She said that for months she didn’t want anyone to know what had happened to her, but she eventually confessed to her family and bank that she was a victim of fraud.

She has also stated that she hopes that by telling her story that it will prevent others from getting taken advantage of in the same way she was. Mrs. Oates, who lives in Hutton Cranswick, first bought some ointment from the catalogue that was advertised as being for joint pain. Since she found the joint ointment to be effective, she decided to order some more.

After she placed the second order for the ointment, Mrs. Oates began receiving information from numerous other catalogues stating that she had won large cash prizes and was just one order away from collecting the money.

The elderly woman finally mustered up the courage to confess what had happened to her, going to her family and bank for advice. She has said that her family has been incredibly supportive through this difficult time. Mrs. Oates’ daughter arranged an appointment with her mother’s bank to discuss the fraudulent charges on her account.

The bank immediately cancelled both of Mrs. Oates’ credit and debit cards. Oates’ stated that she has since gone back to paying for items with only cash, opting not to use cards for any transactions at all.

An employee at the bank told Oates that they see scams like this every single day, and that she should not be embarrassed by it at all. Mrs. Oates contacted Humberside Police as well, and they are in the process of investigating the situation. So far no arrests have been made in connection with this case.

ADELE is worth an estimated £60million but she still shops at Argos. The … END_OF_DOCUMENT_TOKEN_TO_BE_REPLACED

Jean Oates, age 78, was scammed out of thousands of pounds, consisting of her … END_OF_DOCUMENT_TOKEN_TO_BE_REPLACED